Partnership between Aste Bolaffi and CAMERA

STANLEY KUBRICK MEMORABILIA AUCTION: 24,000 EUROS FOR THE JACKET FROM THE SHINING 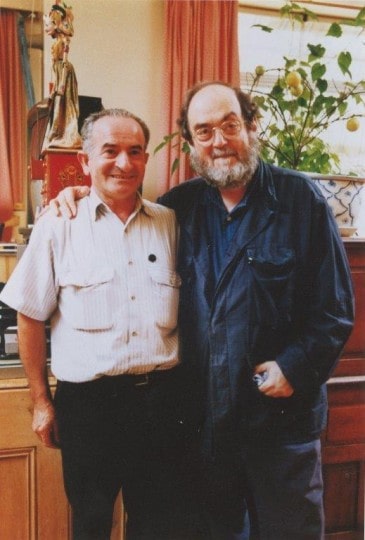 Nineteen years after the death of Stanley Kubrick, Aste Bolaffi announces the sale of the most important collection of memorabilia about his life and his work ever offered at auction, coming from the collection of Emilio and Janette D’Alessandro. On 27 March in Turin, the clapperboard from Eyes Wide Shut, Jack Torrance’s burgundy jacket in The Shining and other items, including personal items and those from the sets, collected and scrupulously preserved by Emilio D’Alessandro, assistant turned trusted man and friend of Kubrick between 1971 and 1999, will be offered at auction.
D’Alessandro began working for Kubrick as a driver but, over time, he established an ever deeper and more personal relationship with him, which he also spoke about in a book published a few years ago. Witnesses of this special relationship, with a director generally known for his gruff and difficult to approach character, are the tributes that the filmmaker gave him in Eyes Wide Shut, giving him a cameo role and giving his name to a bar in New York attended by the doctor played by Tom Cruise in the memorable film. And from that bar comes the large banner on which “Caffè da Emilio” is written (at auction with a starting price of one thousand euros). From the same set, the New York rebuilt in Pinewood Studios, there are also the film’s original clapperboard (starting price 5 thousand euros), and one of the coats and the watch worn by Tom Cruise during filming (starting price 3 thousand euros each).
From the famous film The Shining, the work that reformulated the very definition of horror, we offer one of the most iconic stage clothes in the history of cinema: the burgundy velvet jacket of the crazy protagonist Jack Torrance (starting price 10 thousand euros). The jacket was worn by the actor Jack Nicholson for most of the film, so much so that it became almost indispensable to his character during his hallucinatory stay at the Overlook Hotel. From that set we also offer seven colored key chains with the fictitious numbers of the rooms (one thousand euros) and two rugs from the Colorado Lounge, the room where the protagonist “works” on his novel (two thousand euros each).
A particularly rare item is the long fragment of the original film with the scene of Wendy, Torrance’s wife, carrying her son Danny in her arms, given to D’Alessandro by the director who was famous for burning all the advanced parts of film once the montage was finished (three thousand euros).
From psychoanalytic to horror films, throughout his incredible career Kubrick continuously reformulated the rules of the film genre he decided to work with, such as in the war film and, in this particular case, the sub-genre of Vietnam addressed in Full Metal Jacket. Among the cult objects from the set of this film are one of Sergeant Hartman’s hats, a symbol of the violent and severe Marines instructor who is the protagonist of the first part of the film (starting price three thousand euros), and the green military jacket used by Kubrick on set with his name printed on it (starting price 10 thousand euros). Among vests, torches, and military blades, a vinyl with the original soundtrack of the film composed by the daughter of Kubrick and the signed dedication of the director “To Emilio with Love, S. Kubrick” stands out (starting price two thousand euros).
Other lots include some props from A Clockwork Orange (from one thousand euros), a tricorn hat designed for Barry Lyndon by Milena Canonero, the most well-known and award-winning Italian costume designer in Hollywood, who won her first Oscar for this very film (from one thousand euros) and, from the same set, a binder that contained the script of the film divided by scene (starting price two thousand euros).
This auction also offers the opportunity to rediscover a real cult object: Stanley Kubrick’s orange canvas bag with black shoulder strap.  The “Tenba 2” was the first camera bag with a minimalist and lightweight design (starting price 8 thousand euros). The director never parted with it, as evidenced by the obvious and in a sense legendary traces of wear. The bag is undoubtedly one of the most sought-after items of the auction and also one of the most personal items up for sale, in addition to the handwritten notes by “Stanley” for Emilio and Jannette.
The catalogue closes with one of the last signed notes left by the director to his lifelong friend: “This is the last mail pickup. I am very sad “, signed “S”.