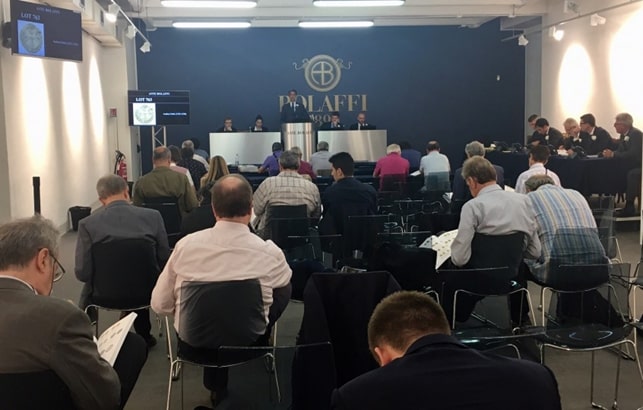 Starting price record, earnings record: the two-day numismatic auction by Aste Bolaffi on 7-8 June exceeded the threshold of 3.5 million (excluding commissions). The auction, with over 85% of lots sold, marks a new milestone for the numismatic department, which, together with stamp department, asserts itself as the leading sector for the company. Thanks to the extraordinary participation of enthusiasts, collectors and merchants in the Bolaffi auction house from all over Europe, and the hundreds of phone calls – from Canada to Russia through Turkey – the lots of highest interest all at least doubled their starting prices.
This was the case for the coins of the Selene Collection, auctioned during the dedicated evening session: 190 exemplars gathered around a central core, the coinage of the Kingdom of Italy, highly complete and of extremely high quality, fruit of collection by three generations.  The protagonist was the rare 50 Lire of 1864 of Vittorio Emanuele II (lot 1596), sold in the hall for 146,400 euros after a heated battle between paddles and telephone bids. Overall, the 190 coins from the Selene Collection (lots 1501-1690) had total sales of 606 thousand euros with over 92% of lots sold. Among the best sellers were also the 100 Lire 1878 from the Rome Mint (lot 1599, 20,740 euros) and the 100 Lire 1864 from the Turin Mint (lot 1597, 19,520 euros).
Among the most significant lots won at the auction are exemplars of medals, which led to almost half a million in sales. The best results for the classic numismatics were those of the 12 Zecchini of Paolo Renier which, starting from 15 thousand euros, rocketed up to 97,600 euros (lot 814), the 100 Lire 1872 of the Rome Mint (lot 1810, 53,680 euros), the 10 Ducati 1621 of Emperor Ferdinand II of Habsburg, Prague Mint (lot 2054, 43,920 euros), and the mezzo Scudo of 8 Zecchini of Alvise IV Mocenigo (lot 806, 43,920 euros).
Finally, optimal results for the catalog of orders and decorations (lots 1-451) with the top lot being the splendid gold Collar of the Gentleman of His Holiness named by Pope Paul VI weighing half a kilo (lot 352), sold for 17,500 euros . Following, at 12,500 euros each, is an extremely rare decoration of the Kingdom of the Two Sicilies (lot 174) and a plaque with a pendant of elegant craftsmanship from Iran (lot 157, Order of the Lion and the Sun). Among the other significant results are those of the Russian insignia of the Order of St. Stanislaus for non-Christians (lot 105, 7.500 euros), the Egyptian set by the Official of the Ismail Order (lot 153, 6 thousand euros) and the Decoration of the Order of Lenin (lot 404, 4 thousand euros).