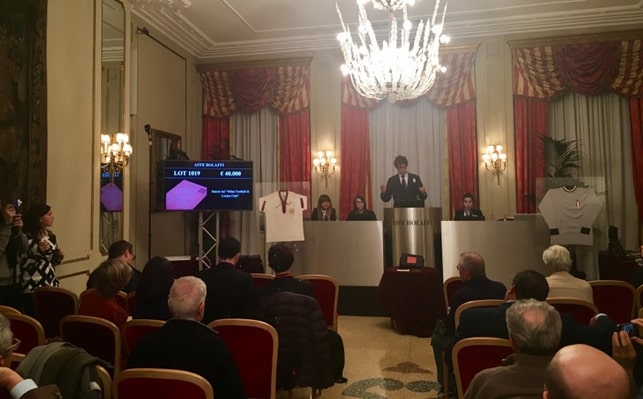 100% of lots sold and 140.000 euros (including commissions) is the total result of Aste Bolaffi’s Football Memorabilia auction that took place today in Milan. The top lot of the sale, which featured 19 lots, was AC Milan’s charter that a prominent lawyer from Milan, Giuseppe La Scala, bought from the floor for 93.750 euros. He justified his purchase stating that this was a necessary gesture from the team’s supporters to preserve the club’s memory, given the absence of AC Milan’s representatives at the auction.
The second top lot was the Cagliari n.11 shirt that belonged to Gigi Riva that he wore in 1970, on the day that the team from Sardinia won its historic “scudetto”; the emblematic shirt takes a return trip back home, being purchased by an executive member of the team for 16.250 euros.
Juventus football club’s Number 1 shirt, worn by its goalkeeper Dino Zoff, fetched 6.500 euros and was purchased through the internet Charity platform “Charitystars.com” on behalf of a client.