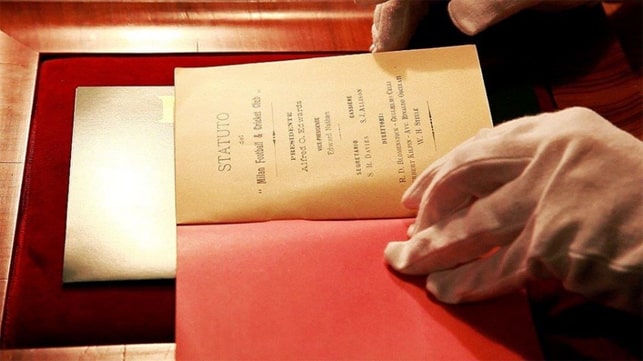 On the 100th anniversary of the death of AC Milan‘s Nottingham-born founder, Herbert Kilpin (24 January 1870 – 22 October 1916), Aste Bolaffi is proud to announce the sale of AC Milan’s charter, which will be put up for auction during the “Rare Books and Autographs” sale on December 14 in Milan, with a starting price of 40.000 Euros and an estimated value of 100.000-120.000 Euros.
Printed in Milan in 1900, the document is the only known testament of the birth of the club – among the most successful in the world – founded as “Milan Cricket and Foot-Ball Club” on December 16 1899 by Samuel Richard Davies, Alfred Edwards, and Herbert Kilpin, who lead the team to its first three championships and even designed its legendary red-and-black striped shirt. “We are a team of devils. Our colours are red as fire, and black, to invoke fear in our opponents,” is how he is alleged to have come up with the colour scheme.
The myth of AC Milan’s origins lives again through the document proposed by Bolaffi: a historical document intended to become a true cult object, of interest to sports memorabilia collectors from around the world as well as to passionate fans and curious investors.